Kyle Maudlin ’11 has several positive things to say about LinkedIn. It’s a rich source of networking. It offers a variety of training opportunities. And it’s a great place to showcase professional skills to potential recruiters.

But it’s also easy to fall into the “comparison trap,” he said, where you wonder how some of your peers are so much further ahead in their careers or how they landed that dream job.

“But everyone’s mountain is different, and some people know sooner than others where they’re trying to go,” he said. “You just have to be comfortable with that and trust that if you put enough hard work and enough time into something you’ll get to wherever you’re trying to go.”

Maudlin, a senior marketing analyst at Salesforce in San Francisco, was sharing his career experience and advice as part of the virtual speaker series with AGSM Graduate Student Ambassadors. Speaking from his home via Zoom, Maudlin assured his audience that everyone is going to take a different path, and his was anything but a straight line.

He worked briefly in personal banking. He spent three years with Macy’s Executive Development Program managing fine jewelry and women’s clothing. He sold digital search ads for Yelp, a popular online business directory and rating site, and he worked at three different ad agencies. It was all part of his journey to find a job in a field that he not only enjoyed but where he was able to thrive. 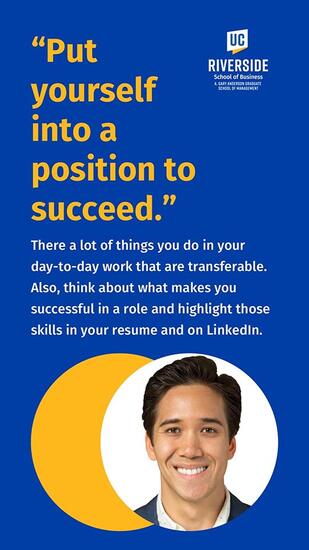 For him, that meant picking up and moving hundreds of miles on faith and taking some considerable pay cuts along the way. He said he was making a decent salary as a sales manager at Macy’s, but he didn’t see that as his future.

He reached out to friends in the tech world who urged him to move to San Francisco and get in the tech game. “I was like, what’s tech? … I’ve been folding clothes for three years,” Maudlin said. But he packed his things and made the move.

He spent six months selling digital search ads, but it was at a significantly lower salary. He described it as the “worst job experience” he’s ever had, bringing his confidence to an all-time low. That wasn’t where he wanted to be either, so it was time to pivot again, he said. He found a job at an ad agency that came with another pay cut.

He said he felt like he was regressing with his pay cuts, but his mentors encouraged him to keep going. “Don’t be afraid to bet on yourself,” he said. “It really was the best move that I could have done. It set me up for all of this.”

Maudlin said luck has played a large role in his success, but his network connections and mentors have been invaluable. A connection at Macy’s helped him enter the Executive Development Program. Another connection helped him escape search ad sales and get into the ad agency.

And in August 2020, he decided to try selling ads at PlayStation, but he knew it wasn’t for him, and the PlayStation experience confirmed it. He left and began networking full time. “I went on LinkedIn and started messaging people,” he said. “I just reached out cold.”

He contacted people with jobs at companies he wanted to work for or who had roles that he found interesting.

“I sent a message like: ‘Hey, your background looks super interesting. I was thinking about doing this. I would love to just chat for 15 minutes. … No hard feelings if not,’” he said. “People like helping people, so I got a ton of meetings.”

Maudlin said connections, mentors and allies are more important than ever, especially in the world of remote work. At the time of his talk, he was working from home nearly 100 percent of the time, but he planned to increase his office visits as conditions allowed.

“I feel like getting those moments where you meet someone in the kitchen and have those water cooler moments can increase your brand at work, especially cross-functionally, which can also indirectly lead to your promotability at work.”

As Maudlin was still searching for his niche, he noticed the large role digital tools and data were playing in the marketplace. Whether it’s a mom-and-pop store or a restaurant, they were all using digital apps that collected data with each transaction.

“And all of that data is used to inform the business,” he said. “So, I thought data analytics is really going to become more and more important with each year.”

Following his own advice, he put himself in a position to succeed. He began teaching himself coding languages and data visualization platforms and invested in a data analytics bootcamp. That effort helped him land his job at Salesforce, he said, because they knew he was serious about learning the skills.

Maudlin also advised his listeners on how to promote those skills on a résumé or on LinkedIn, encouraging them to build their personal brand and share their accomplishments. “You have to be comfortable with being your biggest advocate,” he said.

As an example, he talked about a holiday greeting card project he led at Salesforce that had solid success with a verifiable return on investment. He made sure to lay out the key points and share it in the company’s Slack groups, thanking all the team members.

“That starts building your brand at work,” he said. “I could have done all this, and maybe my boss knows, or my immediate team knows, but no one else knows. It might be much more difficult to get promoted because no one knows who you are, especially in the current work-from-home environment.”

The Graduate Student Ambassadors peppered Maudlin with questions throughout his talk, including asking which coding languages and platforms they should pursue and how COVID-19 has changed the approach to marketing. But one resourceful student took special note when Maudlin mentioned that he might be starting a side business helping people craft résumés and update their LinkedIn profiles.

“Can we send you our résumés before you start that side hustle and get them reviewed?” asked Seth Freeman, joking that as broke college students it would be nice to get in before he started charging.

“Absolutely. I’m totally happy to do that,” Maudlin said. “Riverside is a very special place to me, so it would be great to be able to continue the conversation with all of you.”

View a recording of Maudlin’s discussion with the Graduate Student Ambassadors.